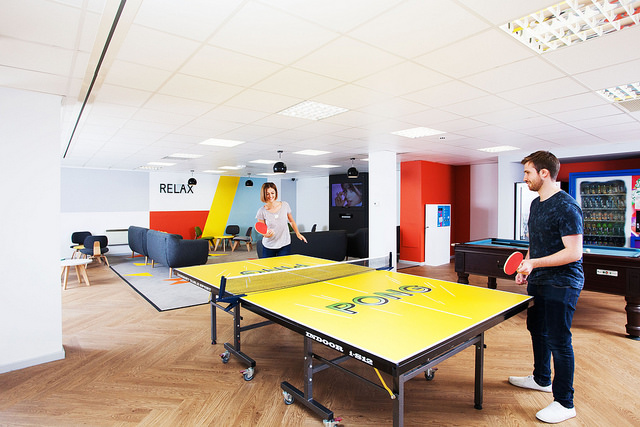 There is a recent trend among organizations that are trying to establish themselves as innovative companies. Over the years of touring office spaces of clients and companies in the Chicago Innovation network, they often seem to end at the same place: a stylish innovation room! These spaces always have a lot in common; the colorful rooms will usually have a ping pong table, comfy seats and bean bag chairs, a stocked fridge full of red bull or sometimes even a keg of beer, and funky artwork will often line the walls alongside dry erase or chalkboard panels. In addition, there will often be inspirational quotes from people like Elon Musk or Steve Jobs.

Having a dedicated space in which your employees can be free to think outside the box in a stimulating environment is great. It falls short, however, when the only innovative thing about the company is its innovation room. Some companies like to point to their innovation room as evidence or proof that what they are doing must be innovative. Sadly, this is not the case. It’s like a team buying flashy uniforms and equipment to play a sport and assuming it will make them great at what they do – the team still needs strategy, dedicated members, and consistent practice to maximize the potential of its players. This is where culture comes into play.

Building an innovation culture involves adopting innovation into the values and norms of your company and establishing a framework that continually allows for it to happen, regardless of the type of room where the work gets done. Jim Sinegal, the former president and CEO of Costco has a famous quote where he says “Culture isn’t the most important thing. It’s the only thing.” Jim’s quote gets at the heart of this issue, which is that if you don’t have the correct or intended culture in place, you are misguided at best and facing disaster at worst. It’s the combination of values and norms (i.e. the beliefs and consistent actions) that build and continually reinforce an innovation culture. Without this, innovation becomes sporadic, untrustworthy, and an empty buzzword to put on the door outside the fun room.

The innovation culture needs to be consciously built into an organization and perfected in the same way that other processes are, such as conducting research or building client relationships. In our newest book Lifting People Up: The Power of Recognition, Chicago’s own Sandee Kastrul, President and co-founder of i.c.stars, reiterates the importance of having a well-defined innovation culture when she says “I define culture as the people, experiences and conditions that create our view of the world. The people are on our team – the staff, stakeholders, interns and managers. These people touch and are touched by i.c.stars.” Thus, if the culture of your company or organization is not rooted in innovation, it doesn’t matter how many really cool and unique workspaces your employees have – the underlying foundation for innovation, the culture, must be there for your employees to create this view of the world.

If you build a culture of innovation, it will come. Innovation rooms are neither necessary nor sufficient to achieve the goals for which the rooms were intended in the first place – to innovate. It takes much more effort to build the culture of your organization compared to a fancy room, but it will be a much more fruitful and worthwhile campaign in the end.